The importance of vitamin D

One in twenty adults have vitamin D deficiency

People are more at risk in winter and the South Island

The importance of vitamin D

Vitamin D is a group of vitamins. The primary form, Vit D3, is produced from cholesterol when Beta rays of UV light (UVB) penetrate the skin. Vitamins D2 and D3 can be found in small amounts in a range of foods such as oily fish, mushrooms and Vit D fortified dairy and cereal products. There are also many supplements that can be useful for at-risk groups.

Low vitamin D levels affect bone and muscle health, leading to osteoporosis and osteomalacia in adults and rickets in children. Vitamin D deficiency is also being investigated for its effects on:

One in twenty adults have vitamin D deficiency

The following groups had higher levels of vitamin D deficiency:

People are more at risk in winter and the South Island

During winter (June to August), the UVI will only be greater than 0 for certain periods of the day [3]:

Outside of these times, the body produces very little or no vitamin D, leading to the risk of deficiency.

Figure 1: Prevalence of vitamin D deficiency by month in adults 15 years and over in New Zealand. 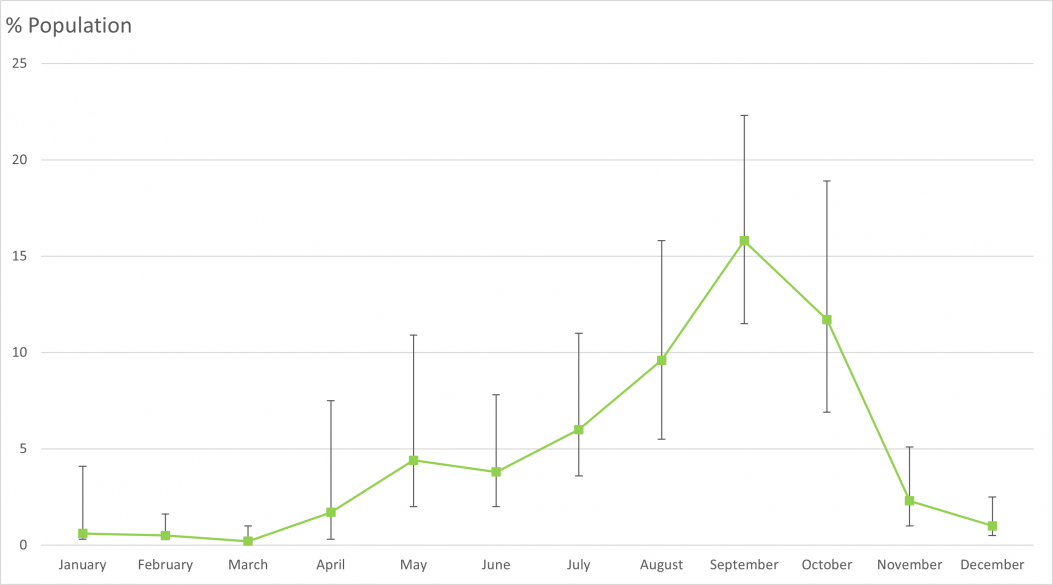 Vitamin D and sun exposure statement for New Zealand This Ministry of Health and Cancer Society statement gives sun protection advice for New Zealanders, and identifies those most at risk of vitamin D deficiency.