This section provides the latest statistics on the water quality at recreational freshwater (rivers and lake) and marine swimming sites. Suitability for swimming is measured in terms of the concentration of faecal indicator bacteria at a swimming site.

While the presence of a small amount of bacteria (typically measured in terms of the number of bacteria per 100ml of water) may pose little to no danger to swimmers, higher concentrations may pose risk to children, the elderly or people with compromised immune systems. Concentrations of bacteria may, and often do, rise to levels were swimming is not recommended for anybody.

Faecal indicator bacteria (FIB) occur in the gut of warm-blooded animals – including humans. They may be introduced to the environment through animal or bird excrement, stock effluent, wastewater discharge, and run-off from contaminated soil. The presence of FIB in recreational water may impact human health by causing gastrointestinal illnesses, as well as infections of ears, eyes, nasal cavity, skin, and the upper respiratory tract.

Testing for the presence of FIB as a measure of suitability for recreation is a common practice internationally, as it is difficult to test for the full range of pathogens that may be present in water. Bacteria like E. coli (at freshwater sites) and Enterococci (at marine sites) are used as indicators as their presence implies that other microorganisms such as Campylobacter, Cryptosporidium, or Giardia may also be present (McBride & Soller, 2017)[4].

Figure 1: Percentage of sites that tested unsafe for swimming on at least one occasion, 2018/19

Coastal sites are generally less susceptible to faecal contamination as the action of the ocean current and tides normally disperses contaminant matter quickly. Between 2016–19, the overall bacterial risk at marine bathing sites was generally lower in contrast to freshwater sites across all regions, though fewer than half (161 out of the 352 unique sites monitored between 2016–19) were able to be confirmed as ‘generally safe to swim’. By contrast, most freshwater bathing sites were not suitable for swimming, with only around one in six sites nationwide (33 out of 252 unique sites) having FIB concentrations low enough to be considered ‘safe’.

Suitability for swimming varies by region

The Hawke’s Bay region had the largest proportion of unsuitable beach sites (3 out of 22 monitored sites) while the Wellington region had the lowest (2 out of 64) (Chart 1). As for freshwater quality, the Manawatū-Whanganui region had the greatest proportion of unsafe sites (44 out of 49 sites). Furthermore, the Gisborne, Hawke’s Bay, Nelson, Tasman and Southland regions did not have a single freshwater bathing site that was generally safe to swim at (Chart 2). Chart 3 offers an interactive view of the data presented in the static charts below. 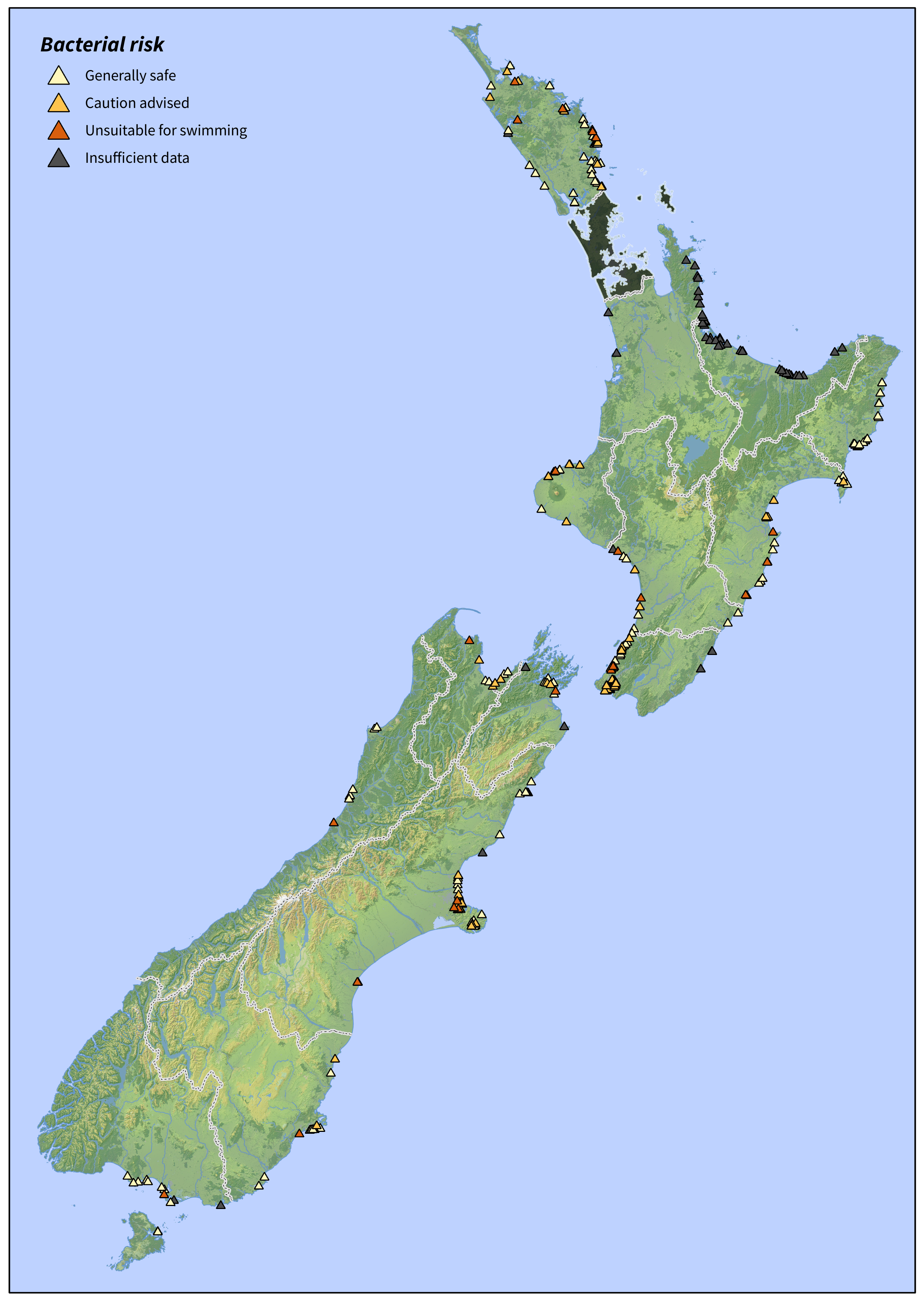 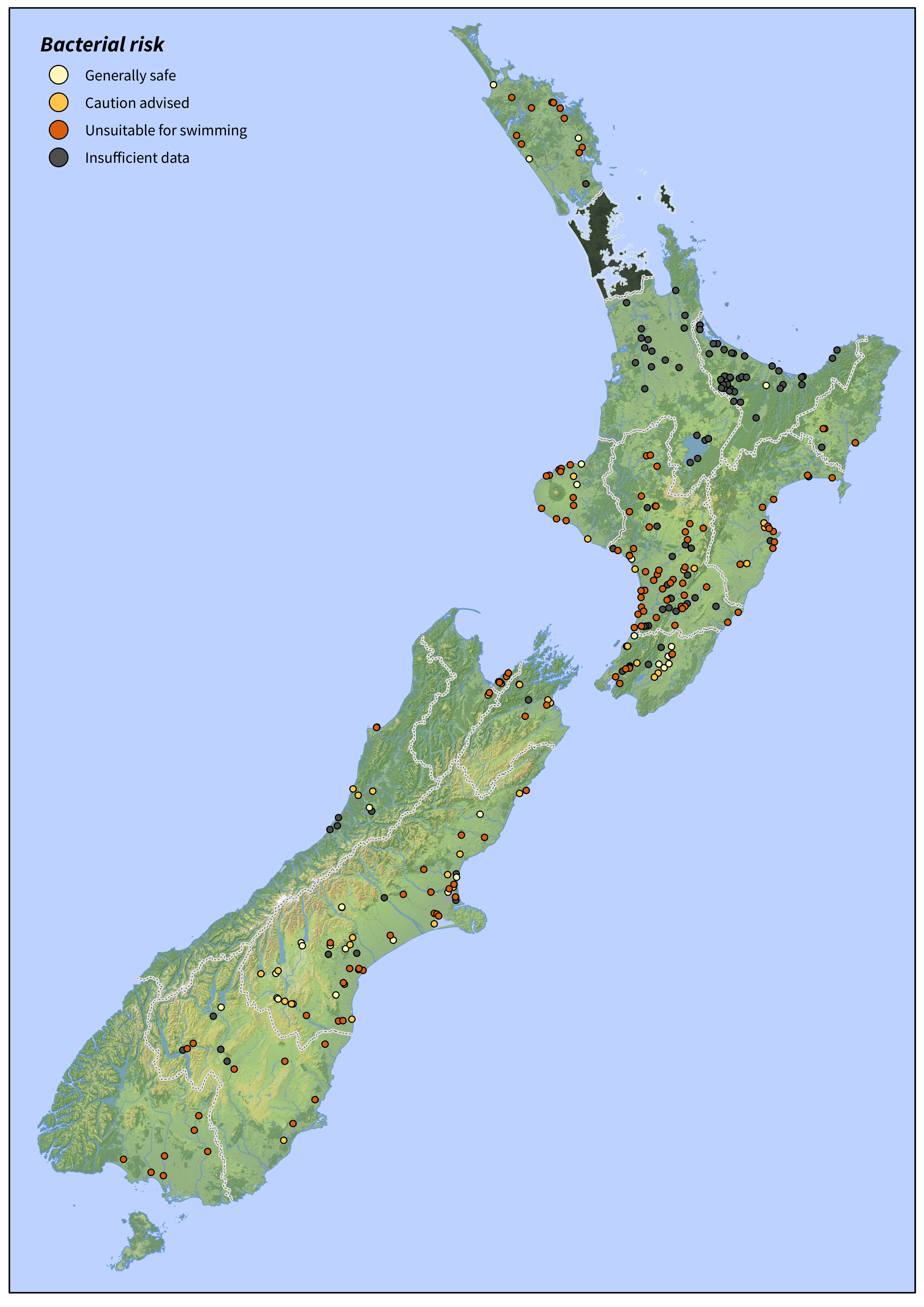 Two measurements of swim site quality are used in this indicator, based on data contained in Land, Air, Water Aotearoa (LAWA)’s recreational bathing water quality raw dataset. Firstly, the regular monitoring results which are passed to LAWA by regional councils, based on regular field sampling at each site. A grade is assigned to every measurement based on the concentration of FIB at the time of measurement. 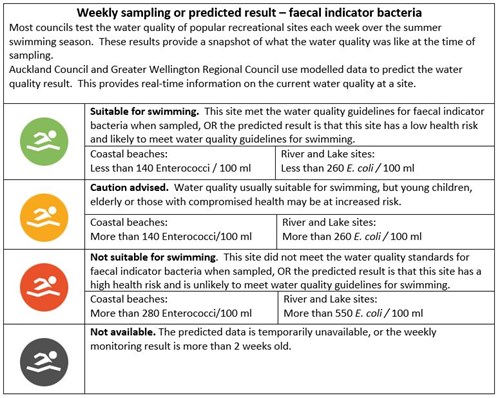 Secondly, ‘overall bacterial risk’, which is calculated based on the 95th percentile value of the recorded FIB concentrations at a given swim site over the past three monitoring seasons. Overall risk is assigned as follows: 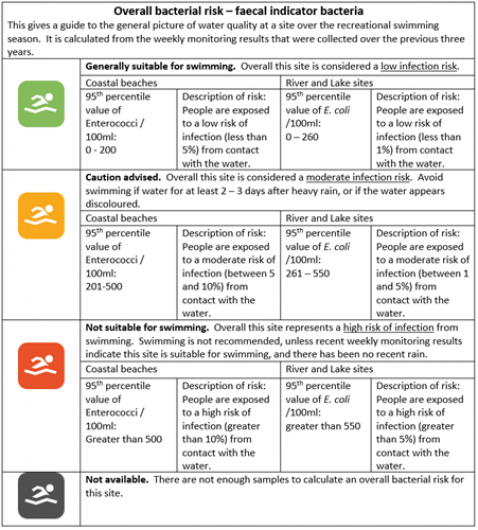